REPORTS of flying squid go back to 1892, but I may be the first person ever to see them fly indoors. I stumbled into the world of flying cephalopods in the late 1970s, when a series of auspicious events led me to spy on squid in the dark. It sounds like a creepy, psychedelic dream, but I assure you it did actually happen.

“I stumbled into the world of flying cephalopods in the 1970s, when a series of events led me to spy on squid in the dark”

It all began with a question from Canada’s Department of Fisheries and Oceans: “You used to study octopus. If we gave you a grant, could you learn something about this crazy squid fishery?” Off-shore fleets had begun targeting short-fin squid, and catches had soared to nearly 200,000 tonnes a year along the North American Atlantic coast, 50 times that of earlier catches. It was an offer a new assistant professor could not refuse, so I became a squid biologist.

To help understand the squid, I decided to bring a whole school into Dalhousie University’s Aquatron seawater research facility in Nova Scotia. No one had ever held oceanic squid in captivity before.

With tanks full of icy seawater and veins full of caffeine, my graduate students and I made a moonlit trek to a nearby fishing village at 3 am. We loaded healthy, live squid out of a big net box trap … 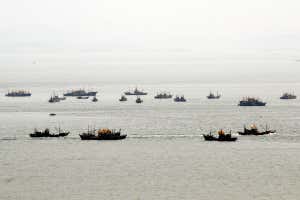